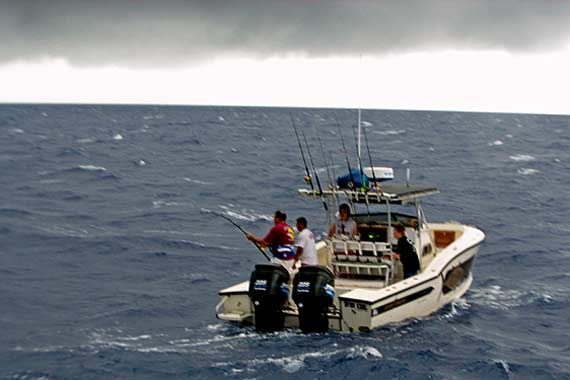 My Ocean Master - You Can't Kill it!

I’ve had 14 boats in my life, including Robalos, Contenders, and Makos.  I’ve fished off of Fountains, Donzis, Cabos, Grady Whites, and even some experimental convertibles built for speed.  NOTHING can hold a candle to my Ocean Master 31.  Compared to the “Even Keel,” these other boats are pretenders.

I have friends who still run these other boats.  They’re good boats.  Many of them will outrun my battlewagon in the river.  But when it comes to stormy offshore realities, you want to be in the Ocean Master.

These other boats also look good—when they’re new or kept inside a building.  It's another story when the boat is subjected to real world conditions, sun, salt, and hard use.

I bought my Ocean Master when it was 18 years old.  It’s still a better boat than anything else on the market brand new.  I ought to know.  Of the 14 boats I had before the Ocean Master, 2 of them I bought brand new with “lifetime” warranties, and the company folded before the warranty ink was dry on the paper.  Other boats I’ve bought were built by companies that were later “bought out.”  After the change of ownership and personnel, you couldn’t get answers about anything concerning the boat and how it was made.  Still others were built by the “hot shot” go-fast offshore crowd—and they had spider cracks and rattles within a year.

When you buy your Ocean Master, you can find something else to worry about besides the stoutness and durability of your boat.  When you buy an Ocean Master, new OR used, you’re buying a product made by a financially stable, privately owned company that will be there tomorrow and thereafter.

Furthermore, when you call Ocean Master on the phone, more often than not you are answered by the founder of the company—the guy who invented and designed the original large offshore center console outboard fishing boat.  If you have a problem, he KNOWS how to handle it and can generally tell you five or six ways to handle it and let you take your pick.

When other boats are becoming non-serviceable from age and offshore abuse, you just re-paint your Ocean Master and go again.  My boat is on its third trailer and fourth set of engines.  It's been sunk at the dock by a storm once and run aground more than once.  You can’t kill it.  I even accidentally dragged it into a huge pole at a service station while on the trailer –-and dented the pole!

When we’ve hammered the yellowfin, nothing holds a catch better than the stadium sized fish box.  Our walk-around cabin gives us the option to pull overnighters comfortably.  Our ride is outstandingly comfortable.  And our fuel burn with the new four strokes is pretty pleasant.

If you’re thinking about making the considerable investment of an offshore boat, do yourself a favor.  Try to arrange to see how the others are built and how the Ocean Master is built.  What you see will speak for itself.

Take the advice of a man who stopped buying boats at #15—buy the Ocean Master first.  Then you won’t have regrets and surprises. 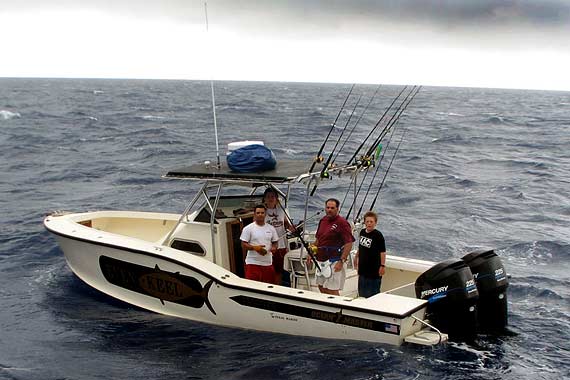