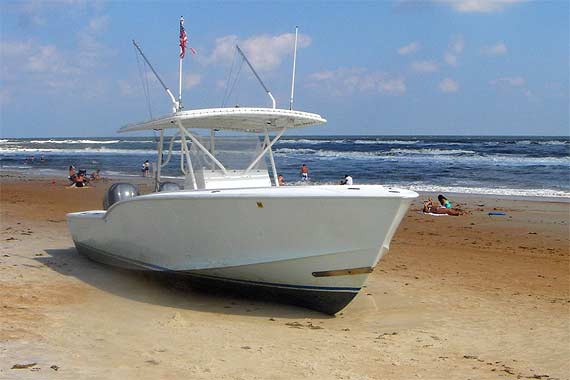 A great story from one of our longtime customers.

This owner uses his Ocean Master 31 as a tender for his big yacht, a 110-foot vessel. The yacht spends much of the year in charter service so the Ocean Master tender gets more than its share of hard use. But this time it was really put to the test.

While being towed behind the yacht in 10-12 foot seas offshore, the Ocean Master broke loose and drifted off. It was later found out that the towing eye snapped, causing the Ocean Master to break free of the tow line. Unfortunately the crew of the yacht had their hands full navigating in the storm and the disappearance of the Ocean Master was not noticed until it was too late. It was now lost and adrift in rough seas.

After a few days of searching, the Ocean Master was given up as lost. Here's where the story gets amazing. The captain of the yacht was driving along the Florida beach and noticed a crowd forming around a boat on the sand. Yep, it was the Ocean Master and he had stumbled upon it by chance while driving back to his home base!

After being adrift at sea, unmanned, for 4 days in a rough storm and then washing up on the beach, the Ocean Master hull suffered no serious damage. Sure she was a bit dirty and had a lot of sand on her, but structurally she was seaworthy. The boat was towed home and touched up and is now back on the water. The only lasting damage was a big dent - in the beach.

Postscript: as if the above wasn't enough, when speaking to the captain he said years earlier the same boat had broken loose from its mooring and ended up on the beach in Connecticut. That time they rolled it on logs back out to the water and it was good to go. That happened twice, so this Ocean Master has had a total of 3 encounters with the shore in its life. And she is still in service. 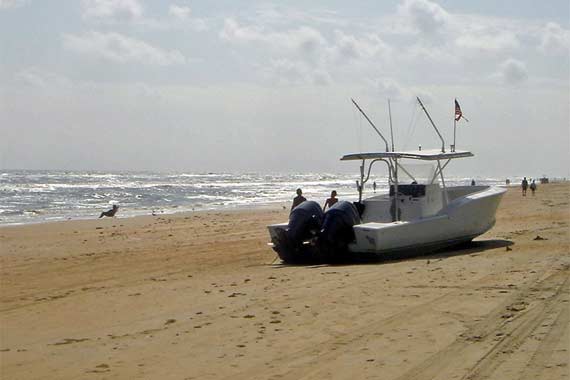