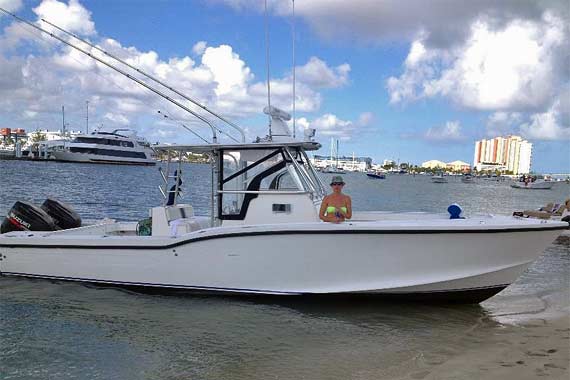 How One Man Found the Perfect Fishing Boat

In Part I and II of selling and searching for a new fishing boat I examine that process. It’s fraught with pitfalls that an inexperienced seller / buyer could fall into. With the experience of having three previous fishing boats, I was aware of positive and negatives that go with the experience. This time around I wasn’t going to buy just another fishing boat. I’d buy “the” boat and have it for at least the next ten years.

I wasn’t in any hurry. I searched and researched as if on a scientific quest. I looked at dozens upon dozens of different boat models, manufacturers, hull configurations and options. My search took me about six months and approximately 3,000 miles of driving time. Some boats I spent hours looking at, testing and evaluating. I remember one boat in particular – I drove close to three hours to look at and when I arrived I took one glance at the boat and said “nope” and left to drive home. My standards have always been high with regard to boats. I was looking for “THE” boat not just another boat.

Meeting the man who actually builds the boats

Around the time when my wife was going to have me committed for having “boat brain,” I found a lightly used and very well kept 31-foot Ocean Master Super Console (OM) with twin Suzuki 250hp – four stoke engines with only 250 hours on them. Now your average boat buyer would test drive the boat and make a decision, but I’m not your average boat buyer. Serendipitously, the OM factory is just 10 minutes from my office. I called the factory and scheduled an appointment with Charlie Modica the founder, owner and president of Ocean Master Boats.

I figured Mark would shake my hand, welcome me and give me over to one of his sales associates. Boy, was I wrong. For one thing there are no sales associates – there is just Mark. He spent about three hours going through every single detail, design feature and history of the boats.

After an enlightening tour, we chatted for another hour. I asked every question I could think of. I never felt rushed, never felt like I was being sold anything, but what I did feel like was that I was in the presence of a boat design genius who would have spent the entire day with me if I had the stamina.

I made it clear to Mark that I was not purchasing a new vessel but rather was looking at an almost new vessel located a few hours away. Guess what? He didn’t care that he had nothing to gain from our time together. What he did care about was sharing with me why his boats are different and why they truly are the best.

Mark told me his boats are bullet proof and really meant it. He said: “A while back, someone shot a large bullet at one of the hulls and the hull stopped the bullet.” Mark does not just build a boat, he overbuilds a boat in every sense. Every boat has up to 20 layers of fiberglass in the hulls, making them rock solid. In fact, they move less than most floating docks while fishing a drift.

Are there any down sides? Of course there are. For one, the OM boats weigh a lot more than comparable vessels. I wasn’t really concerned about that since I have no interest in traveling at 70 miles per hour when I go fishing. Stability is much more important to me than speed. The OM is very stable. It has 10-foot, 3-inch beam.

You’d think that a heavy boat like an OM would not be fuel efficient. However, it turned out not to be the case. The unique hull design moves the OM through the water somewhat effortlessly. Here’s some numbers to prove that point. I hold 300 gallons of fuel in two auxiliary tanks and one main tank. At a cruise speed of 28 knots, I burn around 16 gallons per hour, which gives me a range of a bit over 500 miles.

I was lucky to have found one of these vessels in a barely used condition. They’re rarely found in the market. Why? Simple, those who own an OM never have a reason to sell it. In my opinion they are the toughest, smoothest riding fishing boat in their class.

Although OM makes several models from a 27- to 33-feet, I found that the 31-foot Super Console perfect for my use. There’s a raised deck in the bow for casting a fly line, a stand up head in the console, live well and plenty of room for rigged rods. With the length and beam I can comfortably fish four anglers and more importantly, I can have four anglers with fish on comfortably fighting their fish without worrying about them tangling.

Here is a list of some improvements I made to my personal boat and a brief explanation of why I chose each.

The boat already had a Garmin 5212 GPS which was great for me because I prefer Garmin products for their ease of use and fantastic customer service. I added a second 5212 because when I am fishing I prefer to have a dedicated sounder on its own screen and the second screen for GPS location, radar and possible a higher zoom on the bottom. For me having a 12-inch screen split up into 4 different views defeats the purpose. A single 12-inch screen split up means each window of information is only 3-inches. That’s just not going to work for me and I’m really not into wearing reading glasses when I’m looking for fish. Plus the console on the Ocean Master is so big that one screen just looked too lonely.

I also added a Garmin 404xhd open array radar. Aside from fly fishing, I also swordfish at night. Considering most of my travel is done in “gray” light either pre-dawn or after the sunsets I find myself traveling a lot in either total darkness or poor visibility and the radar allows me to clearly see anything up to 20 to 50 miles away. However, I rarely expand my radar zone past 5 to10 miles. When I am looking for offshore fly fishing targets the radar allows me to mark birds way past what the eye can see. Those amazing fish finding animals that usually follow pelagic fish. Find the birds and you will find fish.

For a transducer I decided on the Airmar R111 In-Hull CHIRP Transducer. In 5,000-feet of water I can see bait on the bottom.

One thing I seem to frequently worry about when drifting for hours on end is draining my batteries. But, I no longer have that concern. Aside from installing a Pro Sports triple battery charger with shore power. My Ocean Master has 3-Group 31 house batteries, which I’m told can power the entire boat for five days without a charge. The more power the better.

Also I added under gunnel LED red lights which will not affect night vision but offer plenty of lighting to safely walk around the boat in the dark.

This was not an addition to the vessel but should be mentioned as its one of the most important features on any boat. My rigging station has a cutting board and room for eight Plano boxes.

Typically, I have everything from light fly fishing to 80-pound class swordfish tackle at the ready in the rigging station with plenty of room to spare. I keep buying terminal tackle, but I just can’t seem to fill the drawers up. That’s a good problem to have.

4. Inside the console there is about 8-feet of headroom. A great place to change clothes, use the built in head or take a nap. The console has windows and when we are on anchor and the windows are open it’s a great place to go into for a break from the sun or to wait out some thunderstorms which is frequent in South Florida. Also, inside the console is the stand up access to all of the electronics and steering controls. I cannot tell you how nice it is to not be kneeling or crouching in a console while installing, maintaining or changing some items on the dash. Anyone who has laid inside a dark console for access to the back of their dash board knows exactly what I’m talking about.

I was lucky to have found an amazing vessel at an amazing price. I was lucky because I put the hours in to narrow down what I wanted in a boat and I was willing to look at a wide variety of boats. Don’t be shy, be smart. Go to factories, dealers, go for rides on friends’ boats and remember don’t let anyone push you into a purchase that you are unsure about. 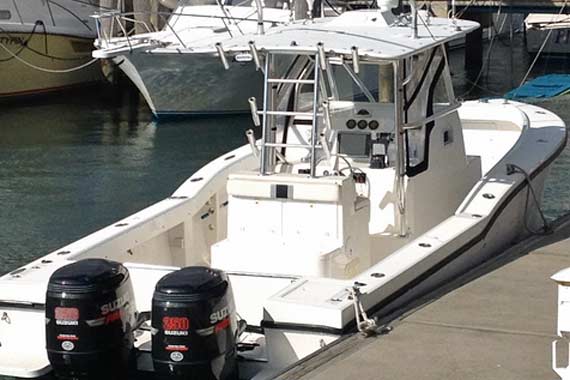